http://www.pon.nic.in/fil-free/Disease.html
What is
Lymphatic  filariasis?

Lymphatic Filariasis is the common term for a
group of  disease caused by lymph dwelling nematode worms
such as
Wuchereria  bancrofti, Brugia malayi and Brugia timori termed as Bancroftian
filariasis,  Brugian
(Malayan) filariasis and Timorian filariasis.
Since these  parasites affect primarily the lymphatic system of man,
the disease  caused is also commonly termed as Lymphatic
filariasis.

Filariasis is  mostly a hidden disease. Individuals with
filarial infection may  be

Asymptomatic  condition:
Asymptomatic individuals are
those infected but without any  detectable clinical symptoms and signs.They
may have detectable  microfilaraemia or antigenaemia. They may be immune
or partially immune to  infection.
Still others in this group may
have subclinical  infections(without microfilaraemia), as indicated by the
presence of  filarial antigens in the blood.

ACUTE
FILARIASIS
The Acute clinical  manifestations of lymphatic filariasis are
characterized by episodic attacks of
lymphadenitis and lymphangitis
associated with fever and  malaise.Sometimes fever precedes the
adenolymphangitis by a few  days.Although the fever sometimes precedes
adenolymphangitis, fever alone, in
the absence of adenolymphangitis,
should not be ascribed to filariasis,  even when microfilaraemia is
present.

The main clinical  manifestations of acute filariasis
are:
FILARIAL FEVER
Filarial fever is  an acute recurrent fever with
haedache, malaise, chills, rigors, low to high  grade
(38-40°),subsiding with sweating and it may closely resemble
malaria.Fever persists for 3-5 days. It is
usually accompanied by
symptomatic lymphangitis and other early signs of filariasis but may occur as
fever
alone.


LYMPHANGITIS AND
LYMPHADENITIS
Acute lymphadenitis and lymphangitis are characteristic of
Bancroftian and Malayan filariasis. The onset is
acute, involving a
single gland or group of glands within the inguinal, axillary, cervical or
epitrochlear regions.
This is accompanied by fever; 6-8 hours later
retrograde (centrifugal) lymphangitis starts in the glands and
spreads  peripherally.

The lymphatic trunks become painful and
cord-like with  characteristic red streaks running down the arms or
legs. The distal  affected limb becomes swollen and oedematous during
the attack which may  continue for
several days accompanied by the
fever.

Lymphangitis may be confined to the groin glands,
testis, spermatic cord (endemic funiculitis) or abdominal
varix
ruptures, symptoms of peritonitis rapidly develop and may be fatal (abdominal
filariais)


FILARIAL FUNICULITIS AND
EPIDIDYMITIS
This is an acute painful inflammation of the spermatic cord and
epididymis. This is usually associated with
fever and inflammation
of  testis and painful glands in the groins. Lymphangitis of the spermatic cord
gives rise
to funiculitis which has been called 'endemic
funiculitis'.It is usually accompanied by filarial fever and
orchitis.

Fluid aspirated from the runica vaginalis is cloudy
and  contains a number of polymorphonuclear cells and
occasional red
cells,  together with microfilariae. The acute symptoms last a few days but
recur at  intervals.
In sections dead and efferentia causing
extensive fibrotic  change are found and it is possible, although not yet
proved, that this  may result in sterility. The end result is a
thickened spermatic
cord.


EPIDIDYMO-ORCHITIS
Epididymo-orchitis is an
acute painful condition involving the testis and epididymis resulting in some
degree
of scrotal swelling and redness. It is usually associated
with  fever, funiculitis and lymphnode elargement in the
groin. The
onset is  sudden with pain radiating to the groin and tendernesss of the testis
which may  swell to
twice its usual size with a boggy feeling on
palpation.  Orchitis is associated with filarial fever,and recurrent
attacks lead  sooner or later to
hydrocele.

Filarial
abscesses develop within superficial lymphatics on the  limbs or scrotum and at
first the symptoms
resemble an attack of  lymphangitis but the pain
and swelling continue, to be followed after some weeks  by
rupture
and a discharge of pus. Pus may be sterile or contain  bacteria particularly
Beta haemolytic
streptococci. Fragments of dead  adult worms may be
discharged.

CHRONIC FILARIASIS
Chronic stage of  filariasis usually
develop 10-15 years from the onset of the first acute attack.  The incidence
and severity of chronic clinical manifestations tends to  increase with
age. The main characteristic feature of
chronic  filariasis
is:

Great enlargement of the  lymphatic
glands with fibrotic changes is common in chronic filariasis. The  glands
(groin glands usually but, in the Pacific, epitrochlear glands)  are
enlarged to 5-7.5cm in diameter and may
form permanent 'tumours'.
On section they resemble an unripe pear, the central portion being fibrotic and
the
peripheral, glandular. They may contain numerous coiled up
adult  worms.

Varicous groin glands are frequently associated with lymph
scrotum  chylocele or chyluria. Then a sense of
tension or an attack
of  lymphangitis draws attention to the area where soft swelling are discovered.
These
swelling may be of insignificant size or they may be as large
as  a fist. They may be noted on groin and affect
the inguinal or
femoral  glands alone or together.

THICKENED LYMPHATIC
TRUNK
After the  initial swelling and inflammation of lymphangitis have
subsided a line of  induration remains. On
excising this thickened
tissue and dissecting  it, minute cyst-like dilations of the lymphatics have
been found
containing live or dead adult filariae (but this surgical
treatment is not  recommended)


Swelling of the distal parts of the body appears
during  acute attacks of filarial lymphangitis and consists of
pitting edema  which at first subsides completely. After each attack
edema increases and  subsides more
slowly until it finally becomes
permanent. The edema  eventually ceases to pit and after a period of time
becomes firm.The  lymphoedema of lower limb is classified into four
grades.


Grade2: Oedema of  the limb which is partially reversible
on elevation of the limb without  thickening of the
skin


Grade3: Irreversible oedema of the  limb with thickening
of the skin


Grade4: Irreversible oedema of the  limb with papillary
and nodular growth.


When the skin becomes  chronically thickened it
can be called elephantiasis and this is associated with
hypertrophy
and fibrous hyperplasia of the subcutaneous tissues.
In  95% of cases the
lower extremities, either one or both, alone or in combination  with the
scrotum, or arms
are affected. The foot and ankle only, the  foot,
leg and thigh may each or all be involved, and more rarely
the
breast, vulva and circumscribed portions of the integuments of the limbs or
trunk.

LYMPH SCROTUM
The scrotum is thickened and the
lymphatic varicosities, in the skin are discharging serous serosangineous or

milky fluid. Many cases have an associated inguinal or femoral
adenopathy.

Hydrocele is the
commonest manifestation of bancroftian filariasis among
males.
Pathologically  it is characterized by a distended, generally
thickened tunica, vaginalis with  hyalinization and
fibrosis of the
subserosal layer, disorganization of  the muscle layers, lymphoid and
foreign-body giant cell
infiltration,  and, in extreme cases,
calcification.
The hydrocele fluid itself is amber in  colour and the
sediment shows a characteristic predominance of
vacuolated
mesothelial cells, fibrin, old blood clots, cholesterol clefts,  and calcium
dust.
Such findings, when associated with epididymal changes, are  highly
suggestive of a filarial etiology for the
hydrocele even without
the recovery of W. bancrofti microfilariae from the fluid or adult worms from
the
cord and epididymal tissues.
A majority of these patients do
not  give any history of ADL attacks in their life time therefore, the
progression
seems to be a passive phenomenon.
CHYLURIA AND  LYMPHURIA
Chyluria is a
condition where the patient complains of passing  milky white urine, caused by
admixture of
lymph with urine due the  rupture of lymphatics into
the urinary system. Prolonged chyluria may result in  the
loss of
fat in the urine amounting to 15% of lymphatic drainage of  the gut. Chyluria
will have the same
metabloic effects as malabsorption  and cause
considerable loss of weight with vitamin, electrolyte and other
deficiencies. The protein loss in lymphuria may lead to oedema secondary
to  hypoalbuminaemia.

Loss of lymphocytes in prolonged chyluria may lead
to  low lymphocyte levels which when associated with
immunosuppression from  drugs may encourage opportunist infections.
Chyluria results in pain in the back
and aching sensations about the
pelvis and groins probably caused by  distension of the pre-existing varix.
Retention of urine from the  presence of chylous or lymphatic clots may
be the first indication of trouble.  The
patient then suddenly
becomes aware that he is passing milky urine  which may be pink or red;
sometimes it
is white in the morning and red  in the evening or vice
versa. Chyluria is likely to occur for the first time, or  as
a
relapse, in pregnancy or after childbirth. The presence of blood  is caused by
the rupture of small blood
vessels into the dilated  lymphatics when
microfilariae may appear in urine passed during the night time
only.

periphral blood although they may be seen in tissues. However, it
has now  been shown that in some cases
with occult filariasis, mf
may actually  be found after more careful blood examination despite their low

density. Occult filariasis is believed to result from a
hypersensitivity  reaction to filarial antigens derived from
microfilariae.Only a very  small proportion of individuals in a
community where filariasis is endemic  develop
occult forms of the
disease.

The clinical manifestations  of Occult filariasis
are:


TROPICAL MULMONARY EOSINOPHILIA
TPE was  first described by
Frimodty Moller and Barton in 1940.
Its main clinical  manifestations
are:

Glomerulonephritis is
associated with lymphatic filariasis. Filarial antibodies have been detected in
2 of 5
children with filariasis and acute glomerulonephritis. Renal
biopsy showed diffuse messangial proliferative
glomerulonephritis
with  C3 deposition on the basement membrane. The condition responds well to DEC


ENDOMYOCARDIAL
FIBROSIS
Endomyocardial  fibrosis is a rare diseasee seen in the equatorial
belts.

The  incrimination of filarial infection in its causation is based
largely on  circumstantial evidence. The
geographic distribution of
the disease in  areas endemic for filariasis, the detection of antibodies to Loa
loa in
patients with EMF, certain clinical features resembling
fialrial infection  and the occurance of eosiniphilia and
EMF with
Loeffler's syndrome have  led to the hypothesis of EMF being filarial in origin.
Further, Filarial
antibodies have been detected in patients with EMF
supporting the theory  that EMF may be of fialrial
origin.

This is a form of
arthritis which usually affects the knee  joints and is fairly common in
filarial endemic areas.
Two types of filarial  arthritis have been desbribed
clinically

Oligoarticular filarial  arthritis:
Typically
affects just one large joint, most commonly a knee.  Synovial fluid from the
afffected joint does not
contain microfilariae,  adult worms or
pyogenic organisms. Monoarticular inflammation may reflect a  tissue
reaction to a filarial worm in the vicinity of the joint.  Rarely,
lymphatic fistulation into the synovial sac causes
chylous
arthritis.

deposition of immune complexes. Intact microfilariae have been
detected  intra-articularly in some patients
with filarial
polyarthritis and the  local release of proteases by the worms may directly
damage synovial  tissue.

Majority of patients with filarial arthritis do
not have fever  but a painless swelling of one or more joints
(usually the  knee).

Sometimes the affected joint may be painful,
warm and tender with  restriction of movement. The symptoms
may
recur, often in the same  joint but occasionally in some other joint and may be
mistaken for rhematoid
arthritis.
It is found that 90% of the
patients with filarial arthritis  tested are positive for filarial antibodies
when tested
with mf of  W.bancrofti in a fluorescent antibody
test
These patients show normal or  moderately elevated eosiniphil counts and
erythtocyte sedimentation rates;
X-rays of the involved joints show
soft tissue swelling but no bony  abnormalities. The antistreptolysin O titre

FILARIAL GRANULOMAS IN
THE BREAST

This  manifestaion is particularly prevalent in India and
Srilanka where W.bancrofti  is the predominant
species. It has not
been reported from areas endemic  for Brugian filariasis. Filarial granulomas
present as
hard breast  lumps attached to the overlying skin and are
at times difficult to distinguish  from malignant
tumours. A
histological examination can confirm the  diagnosis by the finding of an
eosinophilic granulomatous
reation  around the filarial parasites
which are in varying stages of degeneration. Both  adult worms and mf
have
been found in the granulomas. Filarial  antibodies have been demonstrated in
these patients and the
condition  responds to DEC therapy which, in
many instances, can lead to complete  disappearance of the
lump. 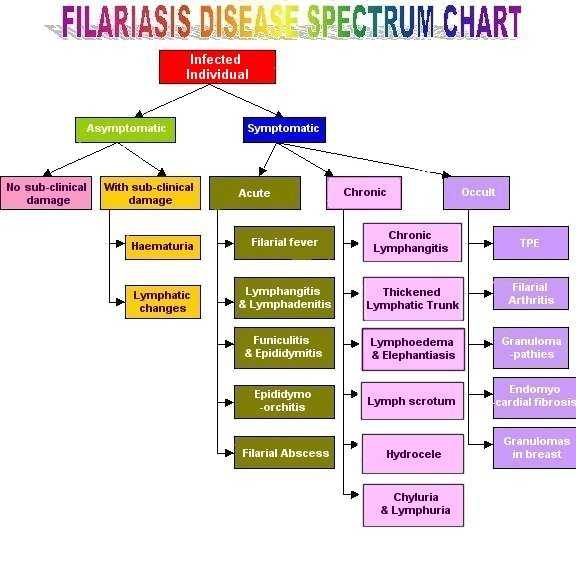